Standing proudly as a symbol of invincible strength and power on the top of a hill, locally known as Bhakurcheeria or the mountain of the birds, at a height of around 400 feet (122 m) above the city of Jodhpur in Rajasthan, Mehrangarh Fort is one of the largest forts in Rajasthan and was the headquarters of the Rajput Rathore clan for more than five centuries.

Commissioned by Rao Jodha, a Rajput ruler of Mandore, the fort was named Mehrangarh or the Fort of the Sun god Surya, the mythical ancestor of the clan, while the town that gradually sprang up at its base, was named after Rao Jodha. Jodha shifted his capital from Mandore to the safer location of Jodhpur in 1459 and decided to construct the new fort on an isolated rock with a higher elevation and better natural defences, as the thousand years old Mandore fort was no longer considered to provide sufficient security. The colossal fort, with an area measuring about 5 kilometres and protected by its 118 feet (36 m) high and 69 feet (21 m) wide walls, contains several historic palaces, known for their intricate carvings and expansive courtyards. However, although the fort was commissioned in 1459 by Rao Jodha, the founder of Jodhpur, most of the buildings which stand today inside its boundary, were constructed during the rule of Maharaja Jaswant Singh Rathore.

As the Fort and palaces were built over a period of 500 years, it evidences the basic architectural style of the mid 15th century along with the features of the subsequent centuries as well.

A winding road leads to the fort from the city below and seven gates serve as the entrances to the fort, made by different rulers during their reign and represent the honour of their victory over the invading armies of Bikaner and Jaipur. 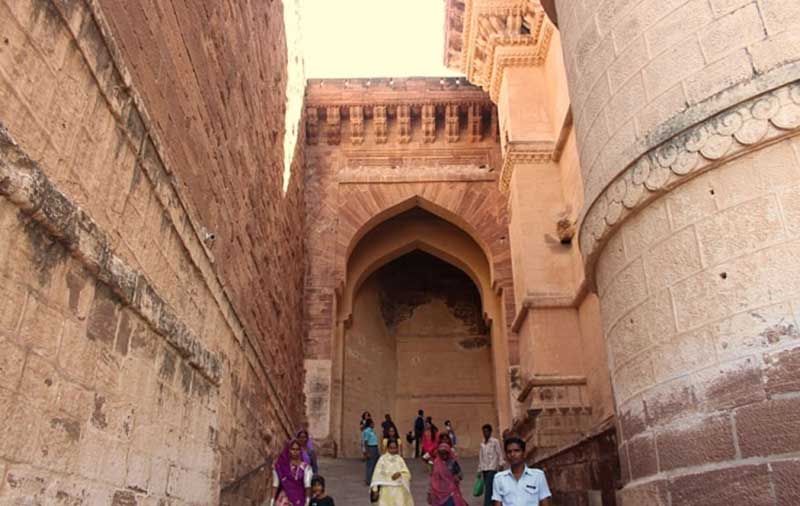 While the Fateh Pol was built by Maharaja Ajit Singh to celebrate a victory over the Mughals in 1707, the Jai Pol or the Gate of Victory was built by Maharaja Man Singh in 1806 to celebrate his victory over the armies of Jaipur and Bikaner. Dedh Kangra Pol still bears the scars of cannonballs of the Jaipur army, who tried to storm the fort in 1807 and Loha Pol, the final gate into the main part of the fort complex is located immediately to the left of the handprints of the queens and some princesses, who had committed Sati or self immolation over the years after the death of their husbands. The other three gates are the Gopal Pol, the second Pol constructed after Fateh Pol, the Amruti Pol, located between the Dedh Kangra Pol and the Loha Pol and Suraj Pol, the innermost gate which provides access to the palace complex and Daulat Khana Chauk.

A Haveli or a private palace inside the fort campus

Besides the seven massive gates that leave tourists awestruck, the Mehrangarh Fort contains several brilliantly crafted palaces, among which most of the buildings commissioned during the rule of Maharaja Ajit Singh were constructed in Mughal design. While Moti Mahal or the Pearl Palace, equipped with the royal throne of Jodhpur, the Sringar Chowki, was built by Raja Sur Singh, Sheesh Mahal or the Hall of Mirrors, richly decorated with convex mirrors with colourful foil and paint and glittering brightly candlelight or oil lamps, was part of the private chamber of Maharaja Ajit Singh.

The lavishly decorated Phool Mahal or Flower Palace, decked with gold and the ceiling inlaid with gold filigree, signifying royal splendour, was built in the 18th century by Maharaja Abhaya Singh and served as the place of pleasure for the court dancers. While Janki Mahal was built exclusively for the queens to enable them to look at the outside world from behind the latticed screens of the palace, Takhat Mahal was built by Maharaja Takhat Singh, the last ruler who lived in the fort. The other palaces in the fort include Khabka Mahal, Sardar Mahal and Umaid Vilas. Apart from the palaces, the fort also contains two exquisitely decorated temples within its boundary, namely Nagnechi Mandir dedicated to the Kuldevi and Chamundi Devi Mandir dedicated to Goddess Durga.

Housed within the fort, the Mehrangarh Museum, managed by the Mehrangarh Museum Trust, exhibits a rich collection of royal palanquins, furniture, arms and armours, costumes, musical instruments, local artefacts, paintings, textiles and many more. The Daulat Khana Gallery displays collections of fine and applied arts of the Mughal period, during which the Rajput Rathore rulers of Jodhpur maintained close links with the Mughal emperors. Strangely, there is also a Turban Gallery that exhibits different types of turbans once prevalent in different regions of Rajasthan.

Do not worry about your difficulties in Mathematics. I can assure you mine are still greater.
Albert Einstein
Post View Counter
2406
34.21
Today So Far
Total View (Lakh)