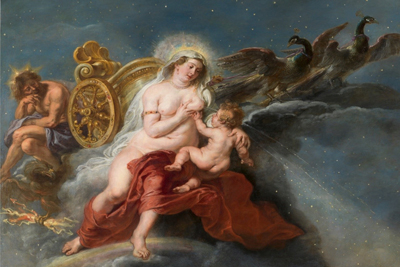 The Athena Fountain, locally called Pallas-Athene-Brunnen, is located in front of the Austrian Parliament Building, situated on the Vienna Ring Road, adjacent to the Hofburg Palace, the former principal imperial palace of the Habsburg dynasty and the Palace of Justice, serving as the seat of the Supreme Court of Austria.

The foundation stone of the building, designed by the reputed architect Theophilus Hansen and built in Greek revival style, was laid in 1874 and the building was completed in 1883.

However, Pallas-Athene-Brunnen was installed in front of the building much later, erected between 1893 and 1902 by Austrian sculptors Carl Kundmann, Josef Hermann Tautenhayn and Hugo Haerdtl, based on plans by Baron von Hansen.

The Athena Fountain is dominated by a 16.4 feet (5,5 m) tall statue of Pallas Athene, the guardian of Athens, as well as the goddess of wisdom, useful arts and prudent warfare; identified with Roman Minerva, standing on a column, above the symmetrically arranged fountain, surrounded by a group of allegorical figures. The beautiful statue carved from Lasa marble was created by sculptor Carl Kundmann, based on the design of architect Hansen, who did not live long enough to see the finished statue as he died before it was revealed in the year 1902.

The elegant statue of goddess Pallas Athene, dressed in armour with a gilded helmet, stands gracefully on the column, holding a small gilded statue of Nike, the goddess of victory, in her right hand and a long, gilded tip spear in her left hand.

Just below the statue of Pallas Athene, seated on the top of the base of the column, the two female allegorical figures made of marble, were executed by Tautenhayn, representing the legislative power on her left, with a book of law in her hand and the executive power on her right, holding a sword.

However, the lowest level of the base of the Athena Fountain at the Austrian Parliament, just above the granite bowl, deserves a closer look. It is aesthetically surrounded by allegorical representations of the four most important rivers of the Austro-Hungarian Empire. In the foreground, the male figure with flowing beard representing the Danube seems to be in a conversation with the female figure with a messy bun representing the river Inn, while the rear side of the base is decorated with the beautiful female figures of the Elbe and the Vitava or Moldau rivers with sculptures of hovering little cupids riding the dolphins. While the statues of the Danube, Inn and cupids were executed by Hugo Haerdtl, the statues of the Elbe and Moldau were created by Kundmann.