Born on 29 February 1956, to teenage parents in Rochester, Michigan, Aileen ‘Lee’ Carol Wuornos is considered as one of the most well-known female serial killers in American history, who killed seven men in Florida by shooting them at point blank range, between 1989 and 1990. However, she was an unfortunate soul, a victim of circumstances and her life was filled with rage, violence and sadness. She had to endure a nightmarish childhood filled with instability, alleged sexual abuse, and homelessness. It is not improbable that her disturbed childhood offers a compelling explanation for turning to prostitution and violence later in life.

Diane Wuornos, a Finnish immigrant, gave birth to Aileen, when she was only 15 or 16 and her husband was only a couple years older. Aileen never met her father, as Dale Pittman left his family before her birth and was in jail, having been convicted of child molestation. Diagnosed with schizophrenia, he later hanged himself in his jail cell in 1969 when Aileen was a teen. By that time, her mother had already abandoned her and her younger brother, leaving them in the care of her paternal grandparents. Within a year after her father committed suicide, Aileen’s grandmother died of liver failure and later Aileen alleged that she was sexually abused by her grandfather, who also used to beat her in those days.

Nevertheless, she found prostitution early in her life, trading sexual favours at her elementary school for cigarettes and other treats. She dropped out of school at the tender age of 14 or 15, as she was impregnated by one of the friends of his grandfather. Next year, after she gave birth to a male child, she was thrown out of the house of her grandfather.

In that helpless situation, Aileen gave up her son for adoption and started to work as a prostitute for her livelihood. In her attempt to escape from prostitution and find a new life, she started hitchhiking around the country, ending up in Florida, where she was briefly married to Lewis Fell, a 69-year-old wealthy businessman, who had settled into semi-retirement as the president of a yacht club. Perhaps, it was the only bright spot in Aileen's dark history, when she moved in with Lewis Fell, but that chapter was short lived.

She frequently left home to booze and having fun in a local bar, where she often got into fights. She also abused Fell and allegedly attacked him with his cane. Eventually, the elderly husband had to run to a local court of law to get a restraining order against her, forcing Aileen to return to Michigan to file for an annulment, after just nine weeks of marriage.

Aileen with her husband Lewis Fell

Around that time, her brother Keith, with whom she was said to have an incestuous relationship, suddenly died of esophageal cancer. Aileen collected his $10,000 life insurance policy, used some of the money to cover the court fine for a drive under influence case and bought a luxury car that she crashed while driving under the influence again. When the money ran out, Wuornos returned to Florida and started getting arrested for theft again. She briefly did the time for an armed robbery at a convenience store, in which she stole only $35 and some cigarettes. She was sentenced to prison on 4 May 1982 and released on 30 June 1983.

During the next few years she again had to work as a prostitute around Florida and regularly faced trouble with the police department. She was arrested on 1 May 1984 for attempting to pass forged checks at a bank, on 30 November 1985, as a suspect in the theft of a revolver and ammunition in Pasco County, on 4 January 1986 for a car theft in Miami, when a 38-caliber revolver and a box of ammunition was found in the stolen car. She was also detained by the deputy sheriffs of Volusia County on 2 June 1986, for questioning after a male companion accused her of pulling a gun in his car and demanding $200. On that occasion, she was found to be carrying spare ammunition and a 22 pistol under her seat.

Around that period, Aileen Wuornos met and fell madly in love with a hotel maid named Tyria Moore at Daytona Beach gay bar. They moved in together to begin a long lasting hot and steamy lesbian affair, while Aileen supported both of them with her earnings as a prostitute. Before long, they were detained by the Daytona Beach police at a bar on 4 July 1987, when they were accused of assault and battery with a beer bottle.

However, the rage that had dwelled within Aileen Wuornos since she was a young girl, erupted in 1989, when she started her killing spree.Unlike most female serial killers, who usually kill their victims by strangling, poisoning, or other less automatic methods, she possessed a lethal weapon of her choice, a .22 caliber pistol, which she used indiscriminately.

Her first victim was Richard Mallory, a 51-year-old Electronic store owner in Clearwater, whom she killed on 30 November 1980. Two days after the incident, his abandoned vehicle was found by a Volusia County deputy sheriff and his bullet riddled body was found on 13 December, several miles away in a wooded area. He had been shot several times and two bullets to the left lung were found to have been the cause of death. Richard Mallory was a convicted rapist served a 10 year prison sentence for sexual assault. Though Aileen Wuornos maintained that she killed him in self-defense, she was initially condemned for the alleged murder.

That was the beginning and from May to November in 1990, Wuornos used her pistol to kill another six persons in different parts of Florida on different dates. Her victims were 40 years old Charles Edmund Carskaddon on 31 May 1990; 47 years old construction worker David Andrew Spears on 1 June; Retired merchant Peter Abraham Siem, age 65 in June or early July, whose body was never found; 50 years old sausage salesman Troy Eugene Burress, whose body was found on 4 August in a wooded area; Retired US Air Force Major, former Chief of Police and former State Child Abuse Investigator Charles Richard ‘Dick’ Humphreys, age 56, on 11 September and 62 years old Trucker, security guard and police reservist, whose nearly naked body was recovered on 12 September form a remote logging road.

The Last Resort, pictured in January 1991

Though witnesses reported Aileen Wuornos in possession of the victim’s car on more than one occasion, the police finally became successful to discover Aileen Wuornos and Tyria Moore’s fingerprints in a crashed car belonging to one of the victims on 9 January 1991. Properly armed with that major evidence, they arrested Aileen from a bar, named ‘The Last Resort’, in Port Orange. Tyria Moore was also arrested on the following day in Pennsylvania, who agreed to cooperate with the police to get Wuornos to confess about the murders in exchange for immunity from prosecution. In the presence of the police, she made numerous telephone calls to Wuornos, pleading for help in clearing her name and after three days of continuous pleading, Aileen confessed to the murders on 16 January 1991, but insisted that she had to kill all of them in self-defense. 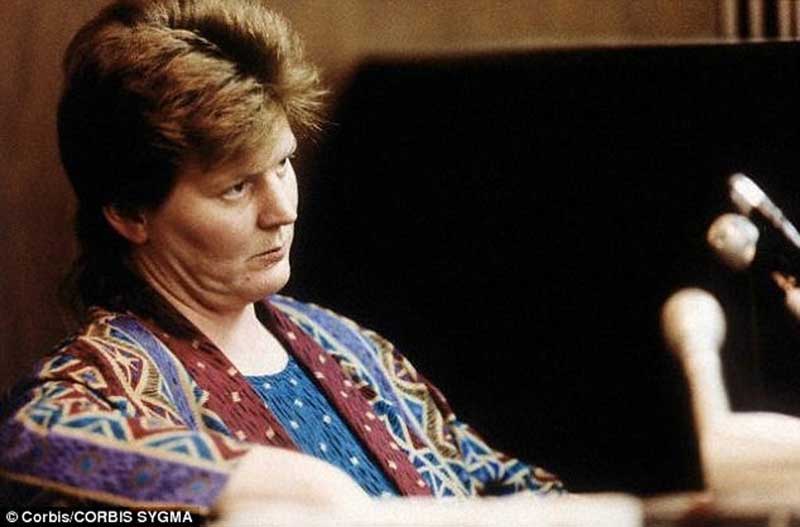 Tyria Moore testified against Wuornos in 1992

During the trial, Aileen Wuornos pleaded no contest on 31 March 1992, to the murders of Humphreys, Burress, and Spears and said that she wanted to get right with God. In June, she also pleaded guilty to the murder of Carskaddon. Initially, she claimed that all of her seven victims had raped her while she was working as a prostitute, but later contradicted her statement with the claims of self-defense, robbery and the desire to leave no witness of her crimes. However, in 2001, she dismissed her lawyers and wrote a letter to the Florida Supreme Court to the effect that, she wishes to withdraw the appeals process. In the letter, she confessed that she killed those men, robbed them and she would do it again, if needed, as she seriously hates human life.

Aileen Wuornos, pictured on trial in 1992

In 2002, after three different psychiatrists certified about her mental competence to understand her death penalty sentence, the then Florida Governor Jeb Bush lifted a temporary stay of order and signed her death warrant. After spending more than 10 years on Death Row, Aileen Wuornos was executed by lethal injection on 9th October 2002.

The Hollywood movie ‘Monster’ (2003), directed by Patty Jenkins, was based on stories from the early life of Aileen Wuornos, until her first murder conviction. The film earned Charlize Theron an Academy Award for Best Actress for playing Wuornos.