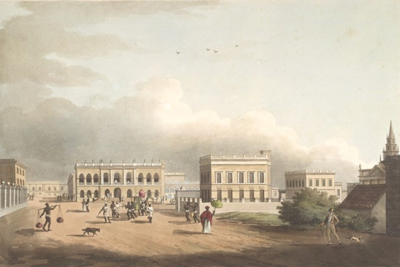 Located about 10 miles (16 km) southwest of Paris, the Palace of Versailles is an opulent complex and former French royal residence that charmed the public imagination for years for its architectural grandeur and political history. Louis XIII, the King of France from 1610 to 1643, bought some land in the village, known for the area's prolific game and built a modest two-story hunting lodge in 1623-1624.Later, he purchased the surrounding territory and replaced the hunting lodge with a château of brick and stone, surrounding the courtyard of the original hunting lodge.

However, his son, Louis XIV, known as Louis the Great or the Sun King, who ruled France from 14 May 1643 until his death in 1715, radically transformed the place into a huge and stupendous complex surrounded by stylized French and English gardens, that included ornate fountains and made it the seat of France's government by the time of his death.

With the active participation of architect Louis le Vau, landscape designer André le Nôtre and fashionable interior decorator and painter Charles le Brun, the enormous and elegant palace of Louis XIV was completed 21 years after it began in 1661. On completion, it allowed Louis to officially set up his court there with 20,000 persons, which included his closest friends, family, courtiers, servants and soldiers. The massive palace, equipped with 700 rooms, 1250 fireplaces, 2153 windows and 67,000 square metres of floor space, was meant to emphasize the importance of Louis XIV. The most important message that he sent through the architecture of Versailles, along with its gardens with sculpture, painting and fountains was his ultimate power.

The Palace of Versailles is a perfect example of baroque and rococo architecture and it offers a visual history of French architecture from the 17th century to the end of the 18th century, which began with the original château built by Lois XIII, with the brick and stone and sloping slate mansard roofs and largely completed by the death of Louis XIV in 1715.The façade of the original château is preserved on the entrance front of the palace and built of red brick and cut stone embellishments, the U-shaped layout surrounds a black-and-white marble courtyard.

The façade is complete with columns, painted and gilded wrought-iron balconies and dozens of stone tables decorated with clamps holding marble busts of Roman emperors. Nevertheless, the exterior of the palace is not as ornate as its inside. Although it is huge and has lots of gold and statues and embellishments, the basic structure is classical, symmetrical, repetitive and based on the elements that are directly borrowed from ancient Greek temples.

Facades of the original Chateau with the marble court

The first floor of the central building houses the lavish apartments of the king and queen and includes numerous salons for entertaining guests and members of the court. The king's State Apartment consisted of seven rooms, each dedicated to one of the known planets and their associated Roman deity. The Salon of Hercules, a gift to Louis XIV from the Republic of Venice in 1664, was originally a chapel and named after the painting on the ceiling, the Apotheosis of Hercules, by Francois Lemoyne. The Salon of Abundance displayed the collection of precious jewels and rare objects of Louise XIV. The Salon of Venus that housed a life-size statue of Louis XIV in the costume of a Roman emperor was used for serving light meals during evening receptions.

The Salon of Mercury, with its ceiling painted by Jean Baptiste de Champaigne, depicting Mercury in his chariot, drawn by a rooster and a scene that indicates Alexander and Ptolemy surrounded by students and scholars, was the original State Bed-chamber when Louis XIV officially moved the court and the government to the Palace in 1682.While he Salon of Mars was used by the royal guards until 1782 and was turned into a concert room between 1684 and 1750, the Salon of Apollo was the royal throne room under Louis XIV. The Salon of Diana, with its walls and ceiling painted with the scenes from the life of the goddess Diana, was used by Louis XIV as a billiards room and had galleries from which courtiers could watch him play. The bed-chamber of the king had originally been the State Drawing Room and had been used by Queen Marie-Theresa and after her death, Louis XIV used it as his own bedroom and died there on 01 September 1715.

However, after the addition of the Hall of Mirrors (1678-1684), the king's apartment was reduced to five rooms and the queen's to four, until the reign of Louis XV, when two more rooms were added. The Queen's apartments and the King's Apartments were laid out on the same design. Originally arranged for Marie-Theresa, the rooms of the Queen’s apartment were later modified for the use of Marie Leczinska, wife of Louis XV and finally for Marie-Antoinette, wife of Louis XVI.

Perhaps the most famous room in the palace is the Hall of Mirrors, which runs along the entire length of the central building, with one of its walls containing a row of giant windows looking out over the magnificent gardens, decorated with fountains. The gallery extends more than 230 feet (70 m) and is marked by 17 wide arcaded mirrors opposite 17 windows that overlook the gardens below. Glass chandeliers adorn the vaulted and the ornately painted ceiling, while gilded statues and reliefs border its marble walls. The Hall of Mirrors is flanked by the equally striking Salon of Peace and Salon of War.

The palace chapel, completed by de Cotte in 1710, is in the north wing of the palace. At the far north end of the wing is the Opéra Royal, built under Louis XV, with its ceiling decorated with a painting of the Apollo, the god of the arts, preparing crowns for illustrious artists. It was inaugurated on16 May 1770, for the celebration of the marriage of Louis XVI and Marie-Antoinette. Much later, it hosted the National Assembly from 1871 until the proclamation of the Third Republic in 1875.

The Royal Chapel, the tallest building of the Palace

It is next to impossible to describe the Palace of Versailles in a limited space. However, no description of the palace is complete without mentioning about its gardens, adorned with numerous statues and spectacular fountains, planned by Andre Le Nôtre, one of the most famous landscape architects in French history. Directly west of the terrace of the palace, decorated with ornamental basins, numbers of statues and bronze groups, stands the Latona Fountain.

The Royal Walk, extending westward from the palace, is flanked by rows of large trees and ends at the spectacular and graceful Fountain of Apollo.

North of the terrace, ornamental gardens slope gently down to a path, called the Water Way, lined with bronze sculptures that ends at the Dragon Fountain, featuring a spray of water that rises nearly 90 feet (27 m) into the air. Beyond the gigantic spray of the Dragon Fountain stands the Neptune, built by Le Nôtre between 1679 and 1681.

To spend a quieter time, away from the crowds and formality of his Court, Louis XIV constructed a pavilion in 1670, about a mile (1.6 km) to the northwest of the palace as a private asylum, to take a much wanted time-out, where only the invited guests could visit. The pavilion, covered with blue and white porcelain in the fashionable Chinese style, came to be known as the Porcelain Trianon. However, it was replaced in 1687, with the Grand Trianon, a larger and more classical pavilion equipped with a terrace and walls faced with different coloured slabs of marble. After the Revolution, the Grand Trianon served as a residence of Napoleon I and later King Louis-Philippe, while they visited Versailles. The Petit Trianon, created between 1763 and 1768 for Louis XV, was gifted to Marie-Antoinette by Louis XVI. 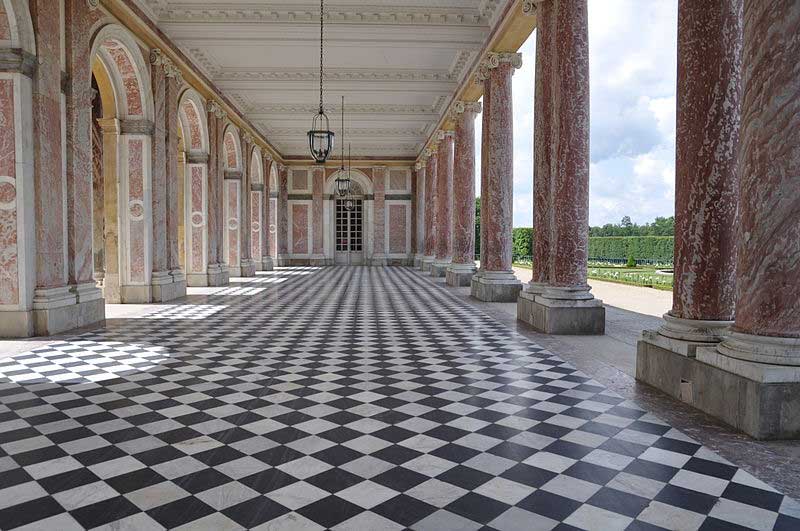 The Royal Chapel, the tallest building of the Palace

Peristyle of the Grand Trianon

The Palace of Versailles became an important site during the French Revolution. At the beginning of the revolution in 1789, Louis XVI and his family left Paris for Versailles. In protest against the rising cost of bread and the apparent lack of willingness on the part of the king to deal with the situation, thousands of Parisian women marched to Versailles on 05 October 1789. The enraged and desperate women attacked the king’s guards, killed several of them, putting their severed on pikes. As the royal family was forced back to Paris, they effectively became prisoners of the revolutionaries. Following the French Revolution, the palace witnessed many significant historical incidents. The Treaty of Versailles, which formally ended the World War I, was in the Hall of Mirrors at the Palace of Versailles on 28 June 1919. It was also used occasionally after the World War II, for plenary congresses of the French parliament or to accommodate the visiting heads.

People dressed in period costumes walk across the courtyard

Listed in the UNESCO World Heritage, the Palace of Versailles received 7,700,000 visitors in 2017, the second-most visited monument in France, just behind the Louvre.

Education is not the learning of facts, but the training of the mind to think.
Albert Einstein
Post View Counter
438
23.83
Today So Far
Total View (Lakh)