Considered among the German rivals of Versailles and located near Berlin, the Sanssouci was built by Frederick the Great, King of Prussia, as his summer palace on a small rise, complete with lush vineyard terraces near Potsdam between 1745 and 1747, to fulfil his dream for a private residence where he could relax away from the pomp and ceremony of the Berlin court.

Designed by Georg Wenzeslaus von Knobelsdorff, a reputed painter and architect in Prussia, the palace was built in close to Rococo style and is far smaller in size than its French Baroque counterpart. Actually, it is little more than a large, single storey villa, containing just ten principal rooms, including a service passage and staff rooms behind them. But for its magnificent decoration, influenced by the personal taste of the king, many scholars often refer to its style as Frederician Rococo. The French phrase sans souci roughly stands for without concern or carefree, which was the primary yearning of the king, the desire to make a palace that would be a place for relaxation and loosening, rather than a seat of power.

Situated above a terraced vineyard,the Sanssouci Palace reflects the pre-Romantic ideal of harmony between man and nature in a landscape bearing the mark of human touch. While the main palace building is comparatively small, not unlike a more impressive version of a Roman villa, the park surrounding the complex is sprawling gardens, fountains, colonnades and statuary dotting the verdant landscape.

Even the terraced hill on which the palace was built has a vineyard at its foot. 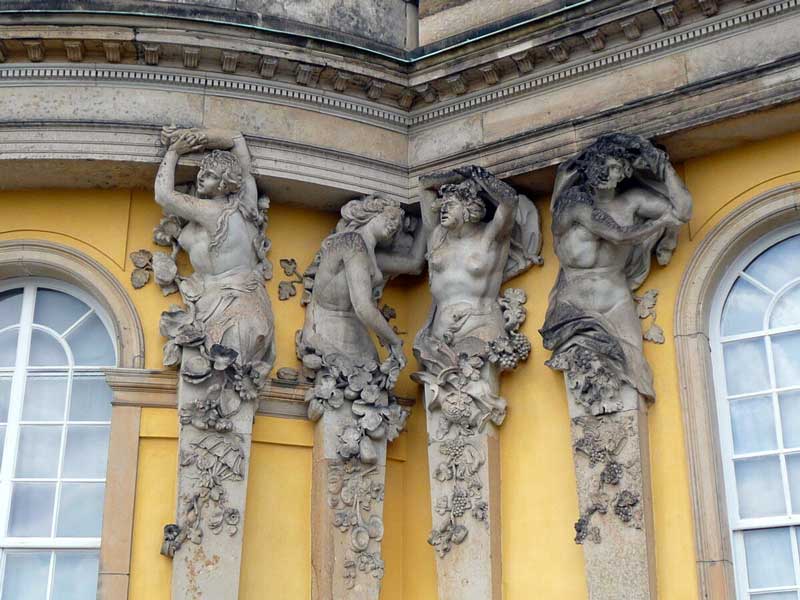 The central bow of the garden façade

The principal block of the single storey palace is flanked by two side wings. As the building occupies almost the entire upper terrace, the prospective monotony of the façade is intentionally broken by a central bow, crowned by a dome rising above the hipped roof, along with the name of the palace written in an unusual way, with a comma and a full stop on it in gilded bronze letters. In contrast, the side wings on the garden front are screened by two symmetrical rows of trees, each terminating in freestanding gazebos or small pavilions, decorated with gilded ornamentations.

However, the north entrance façade is more restrained, where the semicircular cour d'honneur or court of honour, the principal and formal approach and forecourt of the building is surrounded by fragmented colonnades of 88 Corinthian columns, curve outwards from the palace building. In the south side, a balustrade, a row of small columns topped by a rail, along with sandstone vases, decorates the roof of the main corps de logis or the main block. While the west wing contained the palace kitchen, stables and a shelter to house the horse-drawn carriages, the eastern wing housed the rooms for the secretaries, gardeners and servants.

The name in gilded bronze letters

Throughout his lifetime, Frederick regularly used to spend the summer days in the Sanssouci Palace. But after his death in 1786, it remained mostly vacant and neglected until the mid-19th century. However, a century after his accession to the throne, his great-grandnephew Frederick William IV and his wife moved into the guest rooms of the palace in 1840. He liked to live modestly, but gradually, his modesty developed into miserliness. He refused to permit to repair of the outer façade of the palace and only allowed it in the rooms, only with great reluctance. However, during that period, a mezzanine floor was added to both the wings and the kitchen was moved into the east wing.

The main entrance area of the Sanssouci Palace consists of two halls in the centre, known as the Entrance Hall and the Marble Hall. The rectangular Entrance Hall served the purpose of the entrance to the main palace, the walls of which were subdivided by ten pairs of Corinthian columns with gilded capitals. While the three reliefs over the three doors of the hall depict the myth of Bacchus, in concurrence with the vineyard theme created outside, the painted ceiling depicts the goddess Flora with her acolytes, showering flowers down from the sky to the earth below. Located beneath the central dome, the oval Marmorsaal or the Marble Hall, painted in white and gold, served as the Ball Room and the setting for celebrations in the palace. The exotic hall has eight pairs of Corinthian columns made of marble with gilded bases and capitals. While the Italian marble floor is inlaid in compartments radiating from a central trelliswork oval,the glorious white dome is decorated with gilded ornamentations. Flanking the doorway of the hall, the two niches are adorned with the figures of Venus Urania, the goddess of love and prosperity in one side and Apollo, the god of the arts in the other.

Inside the dome of the Marble Room

The gorgeous Dining Room of the palace, adjoining the Marble Hall, also used as an audience room, is richly decorated with paintings by French Masters of the 18th-century. However, the walls and ceiling of the grand Music Room of the palace are luxuriously ornamented with Rocaille, an exclusive French style of exuberant decoration, with an abundance of curves, counter-curves, undulations and elements modelled on nature. After the death of Frederick the Great, the King’s bedroom and study were remodelled in classic style in 1786 by Frederick William von Erdmannsdorff, which are now in direct contrast with the rooms that are designed in the Rococo style.

However, the cedar panelled circular Library is almost hidden, accessible through a narrow passageway from the bedroom, underlining its private character. The compatible shades of brown added with rich gold-coloured Rocaille ornamentations were used in the room to create a tranquil mood. The invaluable library contained about 2,100 volumes of Greek and Roman writings, along with a collection of French literature of the 17th and 18th centuries with a special emphasis on the works of Voltaire. All the books were religiously bound in brown or red goat leather and richly gilded. The niches in the inner wall of the north facing long room of the gallery contain marble sculptures of Greco-Roman deities.The paintings by famous artists like Jean-Baptiste Pater, Nicolas Lancret and Antoine Watteau hung between the niches, are reflected in the ornamented mirrors arranged between the windows on the opposite wall. The other important rooms of the palace include the Rothenburg room, named after the Count of Rothenburg, who stayed in the circular room until he died in 1751 and the phenomenally decorated Voltaire Room, which was frequently occupied by the philosopher during his stay in Potsdam between 1750 and 1753.

Despite the end of the German monarchy following the First World War, the Sanssouci Palace remained in possession of the German royal dynasty. During the Second World, when Berlin suffered severe air raids, most of the notable works of art of the former imperial palaces were transferred elsewhere for safety. However, despite fierce fighting in the vicinity in 1945, the structure of the palace remained unscathed. After the end of the Great War, although the centre of Potsdam was neglected and some of the historic buildings of Potsdam were demolished during almost 50 years under Communist rule in East Germany,the Sanssouci Palace remained untouched.

Visited by thousands of people from all over the world, Sanssouci, along with its extensive gardens, was enlisted in the UNESCO World Heritage Site in 1990.

Education is not the learning of facts, but the training of the mind to think.
Albert Einstein
Post View Counter
1739
25.81
Today So Far
Total View (Lakh)