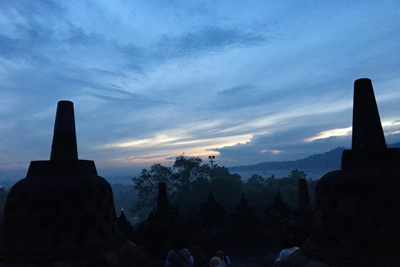 Recognized as one of the oldest and prestigious private schools in the city of Calcutta, St James' School, a school under the Church of North India (CNI), is located at 165 AJC Bose Road, formerly known as Lower Circular Road. Associated with the adjoining St James’ Church, the school was established with the vision to educate the local children, irrespective of race, religion and complexion, to enable them to express themselves fearlessly, armed with value based education. The foundation stone of the massive school building was laid on 7 June 1862 by Sir John Peter Grant, the then Lieutenant-Governor of Bengal and was inaugurated on 25 July 1864, by Rev George Edward Cotton, the then Bishop of Calcutta.

During the first twenty years of its inception, the School had to struggle hard for its survival and at one stage the authority was constrained to close its doors in December 1904, due to acute financial crisis. However, by that time, the school had become a loving and mandatory part of the locality and the closure of the school created a huge repercussion. According to the available old records of the school, it resulted in a huge upsurge of sentiment on the part of the parents, the old boys of the school and the well wishers, in protest of the unwanted closure of the school. In view of the circumstances, the Church Education League came forward to rescue the institution and backed by their financial assistance, the school was temporarily saved, as it reopened in 1907. Unfortunately, the trouble did not end there and as the financial problem continued, the school ran into trouble again and closed again in 1918. Finally, due to the tenacious spirit and the untiring efforts on the parts of the persons concerned, the doors of the school opened again for the students in 1924 under the Rectorship of the Rev Thomas H Cashmore, the Vicar of the adjoining St. James' Church.

Rev Cashmore was a spirited man and he opened the flood gate of a new elated spirit in the life of the school. He had a strong and sincere feeling for the traditions the school had established and wholeheartedly encouraged the students to participate in sports, as he believed it is an essential factor for the development of character. He left India in 1933 and was succeeded by I M Valentine, who followed his predecessor's steps during his tenure from 1933 to 1950.

St James' School had to face the impact of the World War II between 1942 and 1946, when most of the spacious establishments in the city were requisitioned by the government and the school was not an exception to it. During that time air raid shelters were constructed in the school compound and the school premises became a shelter for the soldiers. During that period of uncertainties, the boarders were temporarily rehabilitated to Bishop Westcott School, Allahabad and to Christ Church School, Jabalpur and the school functioned from two rented premises, located at Lower Circular Road and Ripon Street. After the end of the Great War, the school moved back to its own premises in July 1947.

Since its inception, the building of the school has undergone lots of structural changes. Today, it is well equipped with science laboratories and computer centre. In the dim past, the school won the coveted Beighton Cup in hockey in 1900 and keeping its tradition, the school always encourages the students to participate in sports. The school campus now includes a state-of-the-art sports facility with a covered basketball court and two swimming pools. Affiliated to ISCE and ISC Board, the school guides and assists the students in their educational careers.

It is evident that, since its inception, St James’ School has shown a tremendous and irrepressible competency to bounce back from the very awkward situations. With its commendable fighting spirit, it has reached new heights and living up to the motto of Pro Ecclesia et Pro Patria, meaning for the Church and for the Country.

Education is not the learning of facts, but the training of the mind to think.
Albert Einstein
Post View Counter
1431
15999
16.88
Today So Far
Weekly Views
Total Views
(Lakh)