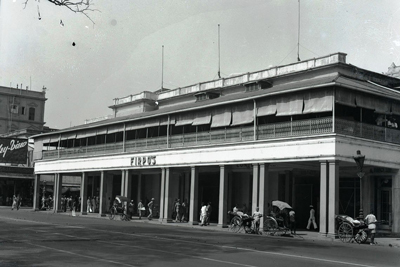 Alexander Duff, who arrived in Calcutta on 27 May 1830, as the first overseas missionary of the Church of Scotland to India, felt the urgent necessity to spread the light of systematic education among the young generation of the city. He also strongly felt that the English language should be used as the medium of instruction, as it was the key to Western knowledge. With the aim of teaching all kinds of secular subjects, alongside the Bible and with the active support of the elite Indians like Raja Ram Mohan Roy and others, he founded the General Assembly's Institution on 13 July 1830, in Feringhi Kamal Bose’s house, located in 51 Upper Chitpore Road, near Jorasanko. The school continued in the same building until 1836, when it shifted to the house of Gorachand Bysack at Garanhatta, where the Oriental Seminary now stands. Finally, it was transferred and settled in its newly constructed palatial building on the Cornwallis Street (now Bidhan Sarani) in 1910.

Inside the school building

Later, to accommodate the increasing number of students, another building was constructed by the side of the main building, which was actually, the playground of the School, situated on Roy Bagan Street. The building was further extended in 1958 and named as Hensman Block after the then headmaster JC Hensman.

The statue of Jesus Christ in the main building

Education is not the learing of facts, but the training of the mind to think.
Albert Einstein
Post View Counter
1218
14582
8.71
Today So Far
Weekly Views
Total Views
(Lakh)