During the early days of Calcutta, the English settlers were concentrated around the Dalhousie square and the adjoining area, which included Terretti Bazar and Lalbazar, their usual shopping hubs. That particular area of the city was called by the Europeans as the White City and their entertainment centres also came up in the locality, which included the Harmonic Tavern, the famous and most popular among the Europeans for its concerts, balls and suppers during the winter days. Apart from the White City, there was another bigger part of the city, the vast area beyond the north of the present Lalbazar area, inhabited by the locals, which was called by the Europeans as the Black City.

However, with the steadily increasing European population, it became an absolute necessity to expand the city area and as the northern side of the city was occupied by the locals, they started to develop the Maidan area, adjoining the newly constructed fort. In the mid eighteenth century, magnificent buildings started to come up on the Chowringhee and soon it replaced the Lalbazar area to become the popular entertainment centre for the Europeans in Calcutta. 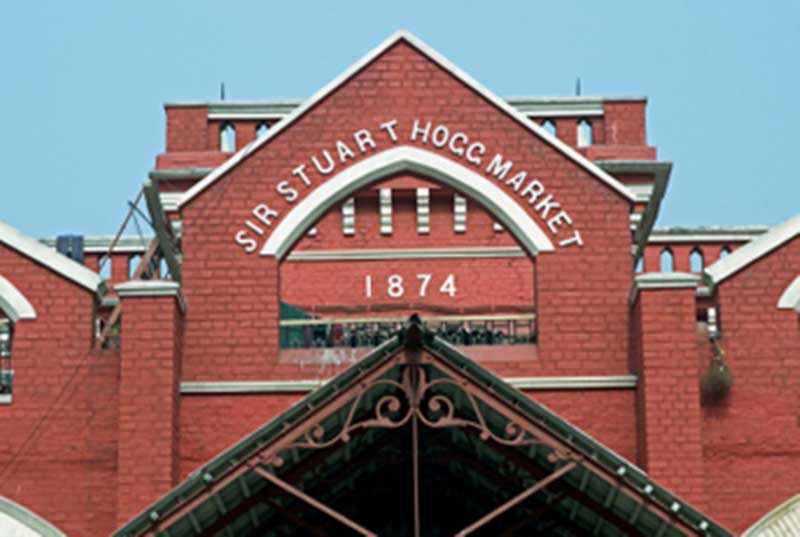 Despite the much needed expansion, the settlers were badly in need of an exclusive shopping complex, as they always hated the idea of brushing shoulders with the locals. The authority finally took up the matter seriously in 1871, when a committee of the Calcutta Corporation started to contemplate about the construction of a new market for the exclusive use of Calcutta’s British residents and decided to proceed in the matter.

Accordingly, the Corporation purchased an area on Lindsay Street, made plans to raze the old Fenwick’s Bazar and its surrounding slum area, to make space for the construction of a new market in its place. Richard Roskell Bayne, an architect of the East Indian Railway Company, was commissioned to design the proposed market complex, which began to take shape in 1873 under the supervision of Mackintosh Burn Ltd. Later, Bayne was honoured for his excellent job with an award of Rs 1,000, which was considered as a large sum of money in those days.

With much enthusiasm, the huge Victorian Gothic building, containing the giant shopping arcade, was thrown open only for the English community of Calcutta on the 1st day of January 1874, which was subsequently named as Sir Stuart Hogg Market on 2nd December and then shortened to Hogg Market. As a matter of fact, Sir Stuart Hogg, the then Chairman of Calcutta Corporation, sincerely supported the proposal and was persistent about the construction of the market building. As a mark of remembrance, a portrait of Sir Stuart Hogg still hangs in the portrait gallery of Calcutta Corporation.

The newly constructed Hogg Market soon came to be popularly known as the New Market, while the locals called it Hogg Shaheber Bazar, the market of Hogg sahib. Gradually, it became a part of the history of Calcutta, as the first municipal market in the city and from the beginning it gained spontaneous popularity among the concerned community. Within a short time, it also attracted others, when the affluent colonials from all over India started to shop at the counters of the exclusive retailers like Ranken and Company (dressmakers), Cuthbertson and Harper (shoe-merchants) and R.W. Newman or Thacker, Spink, the famous stationers and book-dealers.

The clock on the tower

Until World War II, the growth of the New Market kept proper pace with the growth of the city of Calcutta. The northern portion of the market came up in 1909 and despite the stormy days of World War II, an extension was also constructed on the south flank of the building. The historic clock on the tower of the southeast end was imported from Huddersfield and installed in the 1930s. Florists were located near the front entrance and stalls for selling fresh, meat, fresh vegetables and preserved foods were placed towards the rear of the market. Today, there are more than two hundred shops under the roof of the market, selling various products ranging from garments to electronic goods, crockery to crystals and perfumes to junk jewellery. Among several renowned confectioners in the market, Nahoum & Sons deserves a special mention. Until the mid-1970s, different types of birds and domestic animals were also available at the rear end of the market, which could be bought as pets.

Apart from the devastating fire on 18 May 2015, the New Market suffered two other major fires on 13 December 1985 and 20 July 2011. However, despite its ill maintenance and unequal competition from the modern shopping malls, it is still regarded as one of the prime shopping centres of the city and despite the official name and the nicknames, the whole complex is still regarded as the New Market of Calcutta.

Fill the brain with high thoughts, highest idrals, place them day and night before you, and out of that will come great work.
Swami Vivekananda
Post View Counter
2117
23.88
Today So Far
Total View (Lakh)