Located at the end of Lan Xang Avenue, in the centre of Vientiane, the capital and the largest city of Laos, Patuxai is a massive war memorial and a triumphal arch, built between 1957 and 1968 in memory of the Laotian soldiers who died during World War and the war of independence from France in 1949.

While Romanising the name from the Laotian language, Patuxai is often mentioned as Patuxay, Patousai or Patusa. Apart from being called the Patuxai Arch, it is also lovingly called the Arc de Triomphe of Vientiane as it resembles the famous Arc de Triomphe in Paris. However, Patuxai is slightly taller than its Parisian counterpart, has four gates rather than two and is covered with typical Laotian designs and decorated with mythological creatures like the kinnaris, the half-female and half-bird celestial musicians, famous for their dance, song and poetry, and are a traditional symbol of feminine beauty, grace and accomplishment.

The Patuxai was built during a turbulent period of Laotian history when the country was a constitutional monarchy. During the 1950s, the United States provided more than sufficient funds and a huge quantity of cement to Laos, for the expansion of the city’s airport, intending to use it as a base for their fighter jets for the Vietnam War. But as the funds and the materials arrived before any contract had been signed, the Royal Laotian Government took the opportunity and misappropriated it to build the massive triumphal arch, instead of the proposed expansion of the airfield.

For this reason, the locals sarcastically nicknamed it as the vertical runway. However, the ancient monarchy of the country ended in May 1975, when the coalition government was overthrown by the communist leader Pathet Lao. During that time, a half- Vietnamese prime minister was installed and the monument Patuxai was renamed in honour of the victory that was handed to the country by the North Vietnamese Army.

The monument was designed by Tham Sayasthsena, a Laotian soldier, a former journalist, as well as a self-taught sculptor, whose plan and design got the green signal ignoring numerous others submitted by the Military Engineering Department, the Public Works Department, and numerous private architects.

The monument has five towers, built in the traditional Laotian style and representing the five principles of peaceful coexistence as well as the five Buddhist principles of thoughtful amiability, flexibility, honesty, honour, and prosperity. While all the four towers are located on each corner of the monument, the fifth one rises from the centre, higher than the others. All the towers are decorated with flower motifs and each is topped with a golden finial. 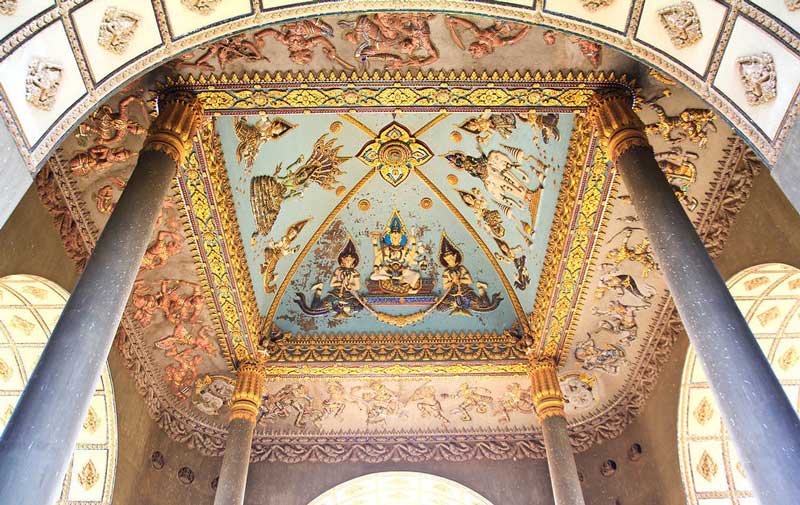 Patuxai has four gateways oriented towards the four cardinal directions with a pond in front of each gateway that represent the open section of a lotus flower, expressing reverence of the Laotians to the brave warriors of the nation. The ceilings of all the arches are decorated with depictions of Hindu gods, the three-headed elephant Erawan and mythological creatures like the mythical bird-woman Kinnaris. The four corners of the gateways are adorned with statues of a Naga King or the Snake King, the mythical symbol of Laos, spraying a jet of water into the ponds, signifying nature, fertility, welfare and happiness.

Patuxai has seven main floors and two concrete staircases wind up from inside the main structure, passing through each floor, right up to the top of the monument. While the first floor mainly houses the offices of the management of the monument, along with the kiosks dealing with the artefacts, souvenirs and refreshments for the tourists, the second floor houses the museum. The next level is an open space where the four towers stand at the four corners. The towers, decorated with frescoes of foliage are equipped with separate stairways and fitted with electric lights, which are switched on during the national day and other important festivals. There is another central larger tower above this floor, equipped with a staircase that leads to the top floor with the viewing platform from where a panoramic view of Vientiane could be seen with the help of a fitted telescope.

God is in all men, but all men are not in God; that is why we suffer.
Sri Sri Ramakrishna Paramahamsa
Post View Counter
2765
18522
14.16
Today So Far
Weekly Views
Total Views
(Lakh)