Although named as a tower, the Azadi Tower or Freedom Tower is the western gateway of Tehran, built in an architectural style that combines modern and traditional sophistication. The impressive monument, considered the most iconic landmark of the city, was built in 1971 in celebration of the 2500th anniversary of the Persian Empire. Originally named Sahyad or Shah’s Memorial as a tribute to the Shah Mohammad Reza Pahlavi, the last Shah of Iran, it was renamed Azadi Tower, following the 1979 Revolution that culminated the Pahlavi dynasty, establishing an Islamic Republic.

In 1966, Hossein Amanat, a 24-year-old architect, just a graduate from the Teheran University, won a competition to design the monument, combining elements of both pre and post-Islamic architecture that marks the west entrance to the capital city of Iran.

The 165ft (50 m) tall structure, clad in 8,000 blocks of white marble from Esfahan that are cut into various geometric patterns, stands on the Azadi Square, a 540,000 square feet (50,000 sq m) cultural complex that combines the basic principles of the traditional Persian Garden through its pristine flowerbeds, streaming fountains, and immaculately landscaped lawn. The Azadi Tower is actually a part of the Azadi Cultural Complex, which also includes an underground museum.

Based on the wealth generated during the 1960s, the Shah was eager to launch programs to modernize and industrialize the country and to distance himself from the past political turmoil. During that time, he conceived the idea to design a monument to commemorate his rule and the 2500th anniversary of the founding of the Achaemenid Empire under Cyrus the Great (Ref –Cyrus II great persia). Accordingly, the first name associated with this monument, even before the announcement of the competition for the monument's design in September 1966, was the Gate of Cyrus. The main archway of the tower, as designed by Hossein Amanat, who won the competition, combines the parabolic arch of the pre-Islamic ruins at Ctesiphon, an ancient city located near the southeast of present-day Bagdad, with the pointed arches of the Islamic period, and thus enveloping millennia of Persian history.

To assist in the structural design of the tower, Amanat intended to contact Arup, a British multinational professional services firm, as he was impressed by their contribution to the construction of the magnificent Sydney Opera House. But he had to face strong opposition from the conservative and nationalistic groups as he preferred a foreign engineering firm for assistance instead of the Iranian engineers.

However, despite the vehement protests, even from the Council of Celebrations, the Shah supported Amanat and sent his letter to the council instructing it to leave the decision to the architect. 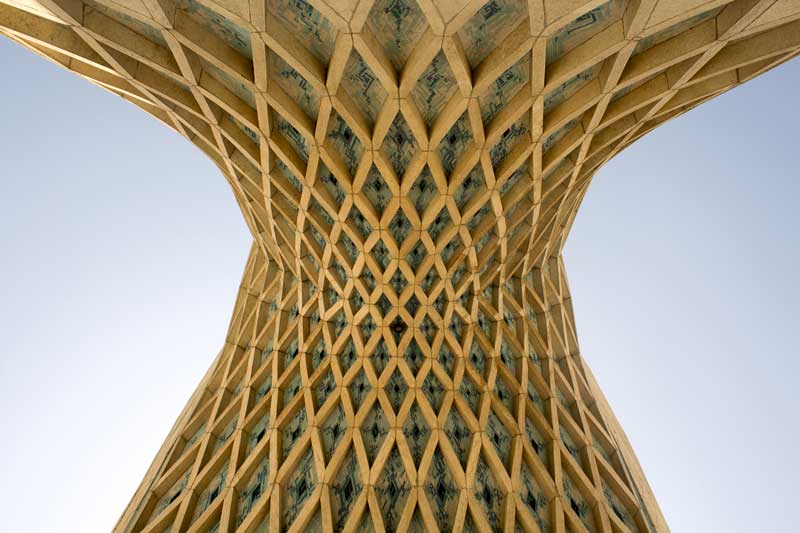 Funded mainly by a group of five hundred Iranian industrialists, and challenging the seismically active location, the tall Azadi Tower was constructed of reinforced, poured-in-place concrete, clad in glistening white marble. Considering the complexity of the arches and curves of the tower structure, the shape of nearly every piece of the stone cladding was unique. Computers, a new technological technique at that time, were used to define the complex woven surfaces of the tower. However, although the inauguration of the tower took place on 16 October 1971, it was not opened to the public until 14 January 1972.

After its completion, the Azadi Tower became the focal point of the Azadi Square, the largest plaza in Teheran, but only after a few years, it became a place for holding public demonstrations against the Shah’s regime. As Ayatollah Ruhollah Khomeini, founder of the Islamic Republic entered Tehran on 1 February 1979 and led an uprising throughout Iran that resulted in victory after 10 days, the anniversary of the Revolution is celebrated every year, on 11th February when the Iranians march from all parts of Tehran to convene at the Azadi Square, near the tower. Despite its association with the deposed Shah, the tower had been embraced by the people as a national symbol of Iran, even after the Revolution.

Unfortunately, Hossein Amanat, the creator of the tower, was not spared after the Revolution. As a member of the Baha’i faith and Jewish descent, he had to face persecution in the newly formed Islamic Republic, accused of introducing the nine windows on each of the main facades of the tower, which were Baha’i symbols. Ultimately, Amanat had to leave the country and settled in Canada.

Today, visitors can go to the top of the tower by taking the stairs or elevator to behold the buzzing of the modern city of Tehran. They may also visit the Azadi Museum, located at the basement level and displaying several ancient cuneiform tablets, pottery, and ceramics, as well as a replica of the Cyrus Cylinder. It is also used as a concert venue, where the Fajr International Music Festival is held every year.