Ashoka, the third ruler of the illustrious Maurya dynasty, was born to King Bindusara in 304 B.C. He was the grandson of the great Chandragupta Maurya, the founding emperor of the Maurya Dynasty. His mother, Dharma, also known as Subhadrangi or Janapadkalyani, was the daughter of a Brahmin priest from the kingdom of Champa, Right from his childhood, Ashoka showed great promise in the field of weaponry skills as well as academics. Gradually, he became an excellent warrior with commanding skill and a smart statesman. With his intelligence and efficiency, his command on the Mauryan army started to grow day by day. Consequently, Ashoka’s elder brothers became jealous of him. Sushima, the eldest son of the King, convinced his father to send Ashoka far away from the capital city of Pataliputra to Takshashila province, with the excuse to subdue a revolt by the mass. However, the army in Takshashila welcomed him with open arms and the uprising came to an end without any bloodshed. This particular success of Asoka made his elder brothers, especially Sushima, more insecure and at his insistence. Bindusara exiled him to Kalinga. There he met and fell in love with the daughter of a fisherman named Kaurwaki, whom he took as his second or third wife. However, due to an unwanted uprising in Ujjain, the Emperor called him back and sent him to Ujjain. In the ensuing battle, Ashoka was injured and was treated by the Buddhist monks and nuns. There, in Ujjain Asoka first came to know about the life and teachings of Buddha.

A Rock Edict Of Ashoka

Bindusara's death in 272 BCE triggered a bitter war over succession. Prince Sushima was the nominated successor, but his autocratic, arrogant and disrespectful attitude made him unfavourable among the elders and the ministers. A group of senior ministers, led by Radhagupta, called upon Ashoka to assume the crown. Ashoka was quick to take the opportunity and following the death of his father, he attacked Pataliputra, defeated and killed all his brothers, including Sushima, but spared only his younger brother Vithashoka. However, his coronation took place in 269 BCE, four years after his succession to the throne.

According to the Buddhist legends, Ashoka was a man of bad-temper and wicked nature and it earned him the name, ’Chandashoka’ meaning, “Ashoka, the angry man” or "Ashoka the Fierce".

Though the Maurya Empire was quite sizable, after ascending the throne Ashoka launched brutal assaults to the neighbouring countries with the intention to expand his empire over the next ten years. He reigned over a realm that stretched from the present-day Afghanistan in the west to Bangladesh in the east. It covered the entire Indian subcontinent, except for parts of present-day Tamil Nadu. Karnataka and Kerala. The only kingdom outside his grasp was Kalinga.

Ashoka waged a fierce and savage war against the state of Kalinga (Odisha), around 260 BCE and finally conquered it, which none of his ancestors had done. On his orders, the whole province was plundered, cities were destroyed and thousands of people were killed. The battle resulted in more than 100,000 deaths and 150,000 deportations, ending at around 200,000 deaths.

After the comprehensive conquest, when Ashoka was surveying the area, he was deeply moved by the burnt houses, the number of bodies strewn here and there and the wails of the bereaved. He deeply repented for the brutality of his action and with a heavy heart returned to his capital, Pataliputra. He sought to be punished for his past deeds, vowed never to practice violence again and devoted himself completely to Buddhism. His personal religion became Buddhism, if not before, then certainly after the Kalinga war and thus the lethal war with Kalinga transformed ’Chandashoka’ to ‘Dharmashoka’ (Pious Ashoka), ‘Devanapriya’ (the Beloved of the Gods) and ‘Priyadarsin” (He who regards everyone with love and affection).His patronage led to the expansion of Buddhism in the Mauryan Empire and other kingdoms during his rule, and worldwide from about 250 BCE. To propagate and establish Buddhism, he even sent his son Mahinda or Mahendra and daughter Sanghamitra (means ‘friend of the Sangha’), to Ceylon (now Sri Lanka). 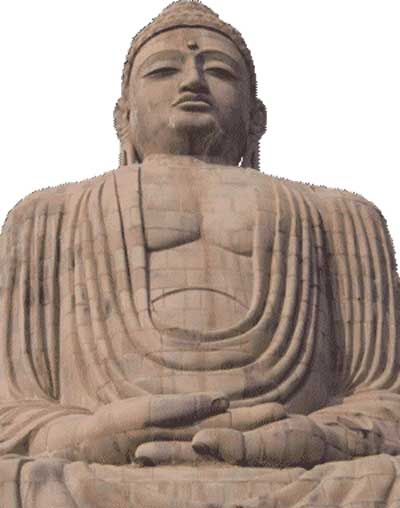 Emperor Ashoka, the third monarch of the Indian Mauryan dynasty, is considered as one of the most exemplary rulers in history and his reign between 273 BC and 232 B.C. was one of the most prosperous periods in the history of India. His administration was focused solely on the well-being of his subjects. He built many universities, water transit and irrigation systems for trade and agriculture. He is also acclaimed for constructing hospitals for animals and renovating major roads throughout India.

In his administrative duties, Ashoke was closely assisted by his younger brother, Vithashoka, along with a group of trusted ministers, whom Ashoka always consulted before adopting any new administrative policy. He introduced many legal reforms like Danda Samahara and Vyavahara Samahara, and clearly pointed out to his subjects the ideal way of life, which should be followed by them meticulously. Inspired by his examples, other Kings also established monasteries, funded the construction of stupas, and supported the ordination of monks in their kingdom.

Dharma, according to Ashoka, is based on humanity and equality, love and kindness for all the creatures in the world. He believed and professed nonviolence, tolerance of all other religions and sects, respect for the Brahmins, other religious teachers, obedience to parents, humane treatment of servants, and generosity towards all.

The Ashoka Chakra, as we see in navy-blue colour on a white background at the centre of the national flag of India, was created by Ashoka. ‘Chakra’, a Sanskrit word, stands for ‘cycle’ or a ‘self-repeating process’. The process signifies the cycle of time, how the world changes with time. In fact, the Ashoka Chakra or the wheel of Ashoka, symbolises the Dharmachakra or the Wheel of Dharma. The 24 spokes of the wheel represent the 12 Laws of Dependent Origination and the 12 Laws of Dependent Termination. The Ashoka Chakra has been widely inscribed on many relics. The most prominent among those relics is the Lion Capital of Sarnath and The Ashoka Pillar. The Ashoka Chakra can also be seen on the base of the Lion Capital of Ashoka, which has been adopted as the National Emblem of India

Ashoka understood and used the permanent qualities of stone for his written edicts, as well as his pillars, with Buddhist symbolism. The rock and pillar edicts are the first tangible evidence of how under the leadership of Ashoka, Buddhism was propagated across different parts of India and abroad. The language of the engraved edicts was unknown for a long time; until it was deciphered by James Prinsep, a famous English scholar, orientalist, archaeologist and historian.

Often Ashoka is also credited to start the stone-building architecture in India, following the techniques used by the Greeks, after the invasion of Alexander the Great. Before Ashoka, buildings were probably built with non-permanent materials, such as wood, bamboo or thatch. Ashoka may have rebuilt his palace in Pataliputra by replacing the wooden materials by stone, and may also have used the help of foreign craftsmen in the matter.

After 40 years of rule, Ashoka passed away at the age of 72, in 232 BC. He left behind a great legacy as an efficient ruler, lawmaker and administrator. He is rightly called as ‘Ashoka the Great,’ – he was a hero, a monk, a good soul and a noble preacher of Dharma. HG.Wells in his book. ‘The Outline of History’, has rightly pointed that, even today, among tens and thousands of monarchs in history, the name of Ahoka shines, and shines.

Prev Next
Cyrus II the Great of Persia Alexander the Great

Fill the brain with high thoughts, highest idrals, place them day and night before you, and out of that will come great work.
Swami Vivekananda
Post View Counter
3311
34.08
Today So Far
Total View (Lakh)