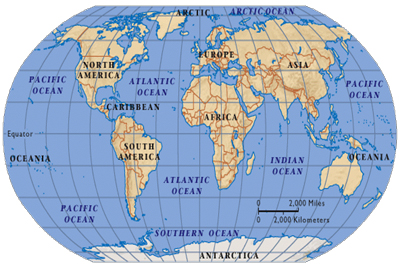 Located near the Arizona-Utah border in the United States, the Wave is an incredibly colourful sandstone rock formation, which simply seems surreal. Until a few decades ago not many people knew about the Wave in the hills of the North Coyote Buttes in the Paria Canyon-Vermillion Wilderness Cliffs on the Colorado Plateau. In fact, it remained unknown till 1909s, when it was widely advertised in German travel brochures and shown in the 1996 movie 'Faszination Natur'.

The Wave was actually sculpted by the wind and rain. Situated some 5,225 feet above the sea level in the Coyote Buttes ravine, it is one of the greatest geological formations that began to take shape about 190 million years ago. It was formed over millions of years of sand dunes that have calcified vertically and horizontally, turning into hardened, compacted rocks over time. Weathered by wind and rain, it has got a remarkable and unique undulating appearance, with massive sandstone structures stretched like candies, and reddish-brown layered domes.

The Wave consists of intersecting U-shaped concavities or troughs. The two major troughs which comprise this rock formation are 19 m wide by 118 36 m long and 2 m wide by 16 m long. However, battered for centuries by wind and rain, those beautiful troughs are now almost eroded, as indicated by the orientation of the steps and risers caused by erosion, cut into the sandstone along their steep walls. These steps and risers are oriented relative to the predominant direction of the wind as it is now naturally funneled into and through these troughs.

It is maintained by the scholars that, the prevailing winds during the Jurassic period pushed the sandy desert dunes across the sandstone, etching it, while water runoff deposited chemicals such as manganese and iron. This resulted the bands of colour, known as ‘liesegang rings’, named after a German chemist. These swirled bands of colour run through the sandstone, ranging from red, pink, orange, yellow, white and green.

The Wave - after a shower

The Wave in winter

The Wave is a geological marvel and they are still susceptible to damage. To protect this phenomenal landscape, nowadays only twenty visitors a day are permitted to walk through the ravine. The necessary permits in this connection are issued through online and in person lotteries. However, the hikers must remain careful, since the Wave has edges, which may break easily, if stepped upon. Moreover, reaching the Wave involves a three mile hike, which means six miles round trip, across the open desert without any landmark and with no signposted way to follow. A GSP is therefore highly recommended, as it is not unheard of about people to get lost in the desert without ever reaching the famous landmark.